Peckham Rye Music Festival returns for a second year running, this time bigger and better expanding over two weekends. Taking place over four indoor and outdoor stages within Copeland Park, there’ll be a host of workshops, talks, fringe events and parties to get your teeth into.

With a stellar list of 14 partners on board including Stamp The Wax, Secretsundaze, Balamii and Field Maneuvers, the nine day festival’s set to showcase a vast amount of talent ranging from renowned international acts to a handful of Peckham’s finest.

Get your earlybirds in here and find out more on the event here. 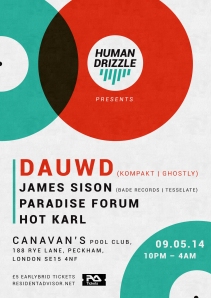 We’re very excited to announce the details of our next party! We’re taking over Canavan’s in Peckham on Friday 9th May and we want you to be there. Tickets are a steal at just five pounds and with the line-up we’ve put together, you’d be a fool to miss out:

We’re thrilled to announce Dauwd as our headliner for the night.

Having had releases on Pictures Music, Ghostly International and most recently Kompakt, the SE15 resident has carved out a formidable reputation for his intricate productions. Since his debut in 2011, he’s continued to experiment with bass, techno and house to critical acclaim. He premiered the soaring title track of his new ‘Kindlinn’ EP on Mixmag just two days ago:

He’s toured both sides of the pond, been twice booked for Boiler Room and is without doubt one of the most exciting UK producers out there right now – we cannot wait for him to headline proceedings. Check out his own Dub version of ‘Silverse’, a highlight from last year’s ‘Heat Division’ EP:

First we have James Sison. He’s co-founder of the hotly-tipped London and Leeds-based label Bade Records and is resident at Tessellate. The latter have played host to HD faves Urulu, Eliphino and Citizen in their debut year, and Bade Records are running a stage at the Innervisions-affiliated One Day festival on 21st June. We’re really excited to see what he throws down. Check out Bade Records’ first two free downloads. One from James himself and one from Berlin-based Ben Bohmer:

We’ve also asked Paradise Forum to come play some records, having been wowed by their ace taste in disco, soul and house at the launch of their label and club night, Paradise Loft. We highly recommend checking out this newly-formed collective:

Warming things up will be HD resident Hot Karl.

More on all the aforementioned soon. But for now, block out Friday 9th May and go bag those early birds! 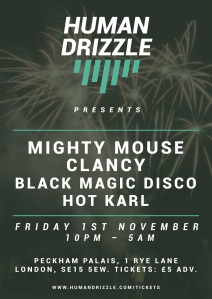 Anticipation at HD HQ for our last party of the year is bubbling up very nicely. In just over two weeks time, we will be welcoming not one, not two, not even three, but four of our favourite DJs to South London’s Peckham Palais. We have Mighty Mouse, Clancy, Black Magic Disco and Hot Karl playing some records for your dancing delectation on Friday 1st November.

Tickets are currently a steal at £5 a pop, so grab ‘em now from the link below, and tell all your mates over here.

As regular readers of HD will know, we’ve been big fans of Mighty Mouse since day one. Over the past few years he’s carved out an excellent reputation for penning feel-good disco house tunes, and we cannot wait to have him headline proceedings on 1st November. Here’s a taster:

Besides his original work, he’s started a compilation series entitled ‘Disco Circus’, has released a string of consistently good mixtapes and been responsible for countless remixes. More recently however, he has formed Du Tonc with Matt Van Schie from Van She. They’ve released one mixtape and written four excellent original tracks, all released on their own label Night Film. ‘Darkness’ could quite possibly be our pop tune of the year. We are stoked to have him playing.

Next up we have Human Drizzle Presents alumnus Clancy. Having totally smashed it at the Bussey Building for our party back in April, we thought we’d get the budding London via Manchester producer back for another slot. He’s released a long list of free-to-download tunes before being recruited by Dirt Crew Recordings to put out his debut EP on their new imprint S P I E L. He’s going from strength to strength.

We also welcome Black Magic Disco all the way from Australia. Having had releases on Toolroom Records and Pole Position Records, he makes 90s garage and house-infused tracks which should be perfect for Peckham’s former department store. He’s known to compile quite the mixtape too, have a listen:

Warming up proceedings from 10pm will be the enigmatic newcomer, Hot Karl.

There’s a whole load of fun to be had. Bag your ticket now and come join us.

We’re super excited to announce the details for our next party. The second instalment of ‘Human Drizzle Presents…’ is taking place on Friday 5th April at The Bussey Building in Peckham. Tickets are currently a steal at £6 a pop; grab yours now from Resident Advisor on the following link:

And tell your friends to come too here:

We’re welcoming four acts over the course of the evening to get your feet a shufflin’.

If you’re not clued up on who these chaps are, or want to remind yourself of their talents, here’s a handy guide of what to expect.

First up is Harry Wolfman, who started causing a stir a year ago with his breakthrough hit ‘Don’t You Know’.

Since then he’s released an EP for Purp & Soul and whilst at it caused some hot fuss for remixing label boss Ben Pearce’s classic ‘What I Might Do’. He’s just dropped his second EP, ‘Booty Call’, and it’s got some serious groove, neatly blending deep house with some nice garage touches. Feast your ears:

Regular readers will appreciate we’re pretty stoked to have Clancy playing. His Little Dragon remix from last year is pretty much faultless and his latest track ‘How To Hold On To You’ has already become one of our most-played tracks of this year. We’ve also caught wind of some new releases in the not-too-distant future. Get excited.

Coming to you from Cape Town via Manchester is Alex Blaxx, who is forging quite the name for himself on the underground house scene. His debut release ‘The Evening Fly’ has already received support from the likes of Bicep and Huxley, and DJ Mag were so impressed with him they invited him to work a set alongside Space Dimension Controller. 2013 looks set to be a very promising year for him.

Last and by no means least we have London-based Real (a.k.a. Boean), who wowed us with ‘My Resignation’ towards the end of last year, an EP of post-everything goodness. Having played a wicked set just a few weeks ago for i-D magazine at XOYO, we are pumped to now have him playing for us. Here are two tracks by the young lad, one old one featuring a Lauryn Hill vocal and a new one forthcoming on XVI Records entitled ‘Don’t Need Ya Love’.