Last month Boiler Room finally managed to woo Nicolas Jaar into their NYC HQ, albeit with a little helping hand from the Red Bull Music Academy. The audio visuals have finally been let loose online. Intricate as you’d expect, there’s a lot going on in this one.

Remind yourselves of the classic BBC Essential mix he did last year too. He sure got skills.

For the longer listen: here are three of our favourite mixes of the moment.

If you’ve not caught it already, Tensnake came in to see Pete Tong last Friday to give a two hour long Essential Mix featuring the old and the new. Most importantly, it features a couple of new tracks from the German’s highly anticipated debut album due out later this year. Next up, The Magician’s Magic Tape series reaches number 30 this month. It kicks off with Goldroom’s new single and features other corkers from Bondax, Claptone and Alex Metric’s re-work of Willy Moon.

Last but by no means least LA duo Classixx’s ‘Immaculate Selections’ Mix. Listen out for an ace rework of Human League, current tunes from Jacques Renault and Mano Le Tough, and the new single from Classixx themselves, ‘Holding On’, also posted below. Enjoy. 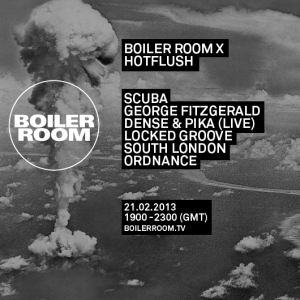 Excitement is almost bubbling over for this one over at HD HQ.

Hotflush Recordings is making their return to the live streaming sensation that is Boiler Room this Thursday 21st February and HD are lucky enough to be going. Be sure to tune in live here for what promises to be an excellent evening of musical entertainment (and the chance to catch a glimpse of certain stellar music bloggers).

Flying the flag and taking the headline slot will be label founder and tip top DJ/Producer in his own right Scuba.  If you want an idea of the delights that’ll be on show, have a peek at the Boiler Room DJ set he did back in June last year. It’s outrageous.

The quality of the support acts is quite something too. Dense & Pika will be performing a live set, South London Ordnance and Locked Groove will showcase the funky side of house and techno, and most excitingly, George FitzGerald will be flexing his skills on the ones and twos. Have a listen to the following for a flavour of what the night promises:

A little tip of the cap to Pete Tong and his team for their special Future Stars of 2013 series of the Essential Mix. Thus far they’ve entertained some real delights. Spawning from the really quite excellent French Express label, they kicked the year off with American DJ Perseus and Sweden’s Jonas Rathsman, who collectively provided a snapshot mix of what French Express are about. Go no further than Chris Malinchak’s ‘You’re So Good To Me’ to see how feel-good it is. The kind people at the super-hot label have crafted a non-BBC version, click here for the free download.

They’ve also invited two heavyweights from the UK bass scene down to partake, Duke Dumont and George Fitzgerald. Both continuing their rise to superstardom, their mixes are littered with names that are making waves in the underground electronic scene, and both are quite simply, essential listening.

Tomorrow night is the fourth and final part of the series and will feature Friction’s one-to-watch in the world of drum and bass, Metrik.