If you’re still on the hunt for a plan Saturday, put down the listings guide. We got you.

Trouble Vision have done it again with a Studio Barnhus label showcase down at Corsica Studios. Axel Boman, Kornél Kovács and Pedrodollar, founding trio of the Swedish label, will all be gracing the decks on Saturday night, bringing their house-but-so-much-more-than-house sound to South London.

Kornel’s gone and done a taster mix to whet the appetite:

As the accompanying RA profile described it, ‘House music for the end of summer’.

Your boy Fort Romeau and Warm head honcho Ali Tillet have gone and set up a new label called Cin Cin, aiming to provide a series of split 12″s which will feature some of their friends old and new. Sounds good to us.

First up FR himself unleashes this dreamy techno number. Stay tuned for the flip side, which is due to feature Nick Hoppner.

For more on the South London producer, a recent Dekmantel podcast featured Fort Romeau’s set at Corsica Studios from a few months back. You can stream the thing below, that’s if you’ve got a spare SIX HOURS. He played some of his favourites all night long… 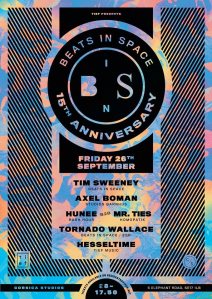 Attention Londoners! What you doing Friday 26th September? Nothing? Get yourselves down Elephant & Castle way, there’s a night you do not want to be missing.

As part of a global tour covering the US, Japan, Mexico and Europe, Tim Sweeney and his merry men are celebrating 15 years of his Beats In Space radio show. Luckily for us, Tief are promoting the London leg at Corsica Studios and with the line-up they’ve put together, it’s going to be CLASS.

If you’re unfamiliar with BIS, way back in ‘99, then New York University freshman Tim Sweeney hit the airwaves of WNYU 89.1 with the radio show, Beats In Space. In the 15 years he’s been running it, he’s not once missed the Tuesday night slot, playing host to a whole range of guest mixes from the likes of Four Tet, Midland, Gui Boratto, KiNK and John Talabot.

Besides securing a legendary home for broadcasting eclectic, cutting edge music on a weekly basis, Sweeney set up a label for BIS in 2009, and having seen releases from Lauer, Paradis and Jee Day amongst others, he’s further developed the brand’s reputation for discovering top quality, new music.

We’ve seen the DFA Records-affiliated DJ play before many times and he never disappoints. Joining him next Friday is a stellar line-up consisting of Axel Boman, Tornado Wallace, Hunee going b2b with Mr Ties, and Tief stalwart Hessletime.

Get your tickets here, and delve into the below for a taster of the night.

This Friday sees Sessions, the weekly in-house promoters at Corsica Studios, curate a line-up only HD dreams are made of. The club nestled in the heart of Elephant & Castle will play host to a whole load of top DJs and you can be there for a mere eight quid. The music at Sessions’ nights consistently delivers and this will be no different.

Headlining is Fort Romeau. We’ve banged on about the South London producer enough on these pages so we’ll just let the music do the talking – the former member of La Roux is HOT property right now.

In support besides Hubie Davison and LK Aka Lee Konitz comes Urulu and Youandewan. Since running his own label Amadeus and having had releases on Let’s Play House and Exploited, Urulu has attracted a huge following. Check out his Let’s Play House mix for an extended listen but we feel his remix of Jessie Ware’s ‘Sweet talk’ went a tad unnoticed, it’s a banger:

Lastly a light must be shone on the Berlin-based Youandewan, whose recent ‘FM Jam’ EP on Aus Music shows off “his adroit handling of classic house and techno tropes”. 4/5 on RA ain’t bad.

Tickets are currently at the reduced price of just £8, one of the many good reasons you should get on down to CS this Friday night. Head here to bag a ticket and tell all your mates about it here.

John Talabot – Without You

Our second most anticipated night on this horizon (after YOU KNOW WHAT) is this Hivern Discs showcase at Corsica that’s doubling up as the launch party for Spanish wizard John Talabot’s DJ Kicks compilation. He’s joined by longtime collaborator Pional and HD fave Fort Romeau, amongst others.

To whet our collective appetites even more, he’s lobbed out an exclusive track from the mix, put together whilst on the road. It’s meandering in the best possible way:

23rd November, put it in your diary.