With the original track charting at number nine in the UK charts back in 1991, here’s the first of two forthcoming Bicep remixes of 808 State’s ‘In Yer face’.

This follows on from the success of their double remix release of Blaze’s ‘Lovelee Dae’ a few weeks back:

Aus Music’s turning the grand old age of 10 soon and to celebrate they’re presenting a whopping 24-track, quadruple vinyl, triple CD release. 90% of the label artist who’ve released on Aus are going to contribute so you can expect tracks from heavyweights such as Midland, Pearson Sound, Breach and Nick Hoppner. There’ll also be a global tour to accompany the birthday, as well as curated stages at festivals and full length albums from Sei A and Youandewan.

To coincide with this and Aus Music’s 100th release, Boiler Room are hosting a five-part debut series over the next month or so, culminating in a very special Boiler Room x Aus100 takeover in London town, featuring Nick Hoppner, Marquis Hawkes, Will Saul and one special guest.

First up in the series this week Bicep and Hammer re-join forces to produce the moving and atmospheric gem that is ‘ARACARI’. Stay tuned for the rest of the bunch.

Bicep are back bringing the heat with their new remix of Tichauer’s ‘Higher Level’. It appears on the Australian’s ‘Street Lessons’ remix EP which features a hefty line-up of Lancelot, Dorsia, Hackman and the Belfast duo all remixing the same tune.

With echoes of last year’s atmospheric banger ‘Just’, this one’s been on repeat since it was uploaded last week.

Brace yourself for this tight and tense offering from Bicep. It’s out on 26th October and is part of a charity fundraiser CD compiled by Craigie Knowes, a Glaswegian label that’s donating all profits from this one to War Child. Check out the full line-up on the release here.

Bicep are back populating these pages AGAIN. They’ve remixed Dyone’s 1993 hit ‘Only Love Can Set U-Free’ and served up a party-startin’ five minutes worth of piano house. Courtesy of First Choice Records it can be yours on 14th August…

The Belfast duo are now two weeks into their XOYO residency with a hefty eleven to go. There’s a stellar line-up of guests accompanying them throughout with highlights including Midland, Andrew Weatherall and Nick Hoppner. Check the website for full details and go book yourselves in.

It’s time for your weekly dose of Bicep lovin’.

The Belfast boys withdraw from their trademark style for ‘Celeste’, replacing the stomping 4×4 with bongo drums and vocal hooks with drawn-out swoons.  The result is a transfixing piece of dance music unlike anything we’ve heard from them before, carried off like it was their signature sound.  Definitely one to miss-your-bus-stop to.

Catch them at their summer residency at XOYO throughout July, August & September.  Not one to miss.

Following on from the atmospheric ‘Just’ a couple of weeks back, we (in collaboration with the Mixmag soundcloud account) bring to you the second cut from Bicep’s upcoming EP.

‘Back 2 U’ (Tranz Dub) flows through the same vein as ‘Just’ in grabbing your attention beyond the ups and downs of your average house track. It has soaring vocals dipping in and out but the focus is on the percussive bass, carrying you through the eight minutes.

The boys are back on Aus Music for this one with a vinyl release on 24th May.

Now this is something. ‘Just’ is the new one from Bicep, brought to you (and us) by the increasingly influential Boiler Room Debuts, and it’s a humdinger of a tune. Combining atmospheric builds with catchy riffs and busy percussion, it’s a multilayered beast that should probably soundtrack an esoteric sci-fi film that you say you love but, if you’re really honest, you don’t really understand. It’s out on May 25th anyway (the track, not the film).

Èbony vs Bicep – Love Myself

Muscular duo Bicep have teamed up with Torontonian two-man Èbony for this delightful giveaway. It’s a coming together of the percussive stylings of the Belfast lads with a dash of the soulful melodies of Yoruba house that Èbony bring to the party. We’ll be keeping a close eye on Sylvermayne and Jordan Gardner, expect a big 2015 from them.

Flexing their muscles again, Essential Mix called up Bicep a couple of weeks back and it’s just hit Soundcloud:

They’ve called it ‘club-focused’ and that serves nicely as an umbrella for their wide-ranging selections. Get stuck in.

And oh boy are we in for a treat this weekend: 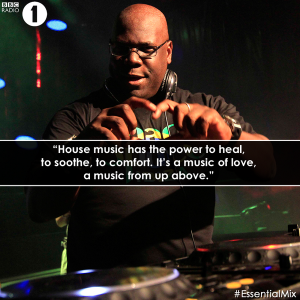