Sydney-based trio Seekae’s single from last year, ‘The Worry’ has been remixed by none other than Berlin producer-extraordinaire, Henrik Schwarz. It’s coming out on the Future Classic label, and it’s delightfully quirky, particularly in the latter half when it really gets a wiggle on.

Welsh duo Bodhi have recently dropped the final two cuts from their ‘Satisfaction’ EP, out now on the excellent Exploited label. They’ve chucked everything but the kitchen sink into the seven minutes that make up the funky ‘Truth’, and ‘Soul Music’ does what it says on the tin, with the added bonus of a thumping Bodhi beat. They join the excellent ‘Satisfaction’ on the EP, and we’re big fans of both:

If you’re after something a little longer, they’ve put together an uplifting and feel-good 30 minute mix for Outlook festival, ahead of their performance there this summer.

The news of Jamie xx’s first solo album prompted a profound excitement here at HD. There are few artists out there who can mesmerise you with the moody pop of the XX on the walk home then have you cutting a rug later to pretty much anything from grime to hardcore (Proof = here).

‘Loud Places’ is the latest single to be aired off his new album ‘In Colour’ due out on Young Turks June 1st. Here he finds a beautiful middle ground, using his production talent to showcase all sides of Romy’s voice from the melancholic to the euphoric. The attention to detail on production is noticable, first letting Romy’s distinctive voice do the work alongside a sparse bass drum before throwing everything from handclaps to vocal loops together towards the end. All in all, it’s a triumph, and an exciting prospect for the summer months.

The album tracklist includes some old friends in Romy and Oliver Sim, alongside the more unexpected faces of Jamaican Dancehall legend Popcaan and eccentric Atlanta rapper Young Thug. Here’s hoping for an all-star album tour over the summer.

Palmbomen II is the second such alias of Holland-born producer Kai Hugo, this one said to embody the hermetical nature of the recording process, all done in his mother’s attic. All the tracks are named after bit-part X-Files characters too so you can imagine the vibe he was on. All that’s just bumpf though, the tunes are high quality low-fi electronica and well worth a listen.

Fort Romeau – All I Want

More infectious sounds from Fort Romeau, on this, the third cut from his ‘Insides’ LP due out on Ghostly International next week. As ever with the South London-based producer and Human Drizzle Presents alumnus-extraordinaire, the patient will be rewarded with ‘All I Want’, the tune really coming into its own as the piano keys shine through in the second half. This joins ‘Insides’ and the fruity New Jackson collab ‘Not A Word’ on the album, which is dropping a week today on 31st March.

Can’t wait that long? The good people over at Hype Machine are streaming the whole damn thing to whet the appetite, check it out here.

Garden City Movement – When We Had It Easy

After a long night carousing in honour of hitting 2000 twitter followers*, this is just what HDHQ needed today:

‘When We Had It Easy’, the new single from Tel Aviv electronic trio Garden City Movement, picks up where we last found them, fusing glitch electronica with some serious pop melodies. It’s delightfully atmospheric and whets the appetite nicely for next month’s ‘Modern West EP.

*Not really, we’re saving the champaegerbombs for when we hit 10k. 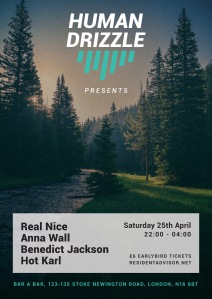 On Saturday 25th April, we’ll be taking over Bar A Bar on Stoke Newington Road for six hours of the best that London’s young DJing elite can throw at us. What’s more, HDP version 8.0 will be the first instalment of a high-calibre series of Human Drizzle parties coming your way this year.

We’ve worked hard over the winter to curate a line-up of really exciting artists, all of whom are making big waves in the capital, the UK and beyond. Real Nice and Benedict Jackson have long been on our radar and we’re delighted to have them join Human Drizzle for the first time. And when we first heard Anna Wall at Oval Space last October, we were in contact the very next day about getting her onboard.

From humble beginnings DJing and throwing parties all across Bristol and London, to more recent years producing their own music and running their own label, Real Nice have made an impressive mark on the underground music scene and we can’t wait to see them on the ones and twos. We love this mix they did for Mixmag last year.

We’re also really excited to have Benedict Jackson bringing his combination of disco and house to the night. His mixes show a diverse range of old and new, with as many classics included as there are current club bangers. This, his latest mix, is no exception and hot off the press to boot…

Anna Wall has been making a name for herself since moving back to London after stints in Berlin and Ibiza. Whilst on her travels, she’s chalked up some big slots in the booth at some of Europe’s most respected clubs, including regular playing time at ://about blank in Berlin. A summer on the road beckons and it’s great she found time to party with us before setting off. Below is a taster of what she’ll be bringing to Human Drizzle Presents.

A night in a sweaty darkened room wouldn’t be complete without the looming presence and eargasmic selections of our resident Hot Karl. When he starts his set, the punters haven’t arrived; by the time he’s finished, they’re all in the smoking area. A true professional.

Only things left to do are (i) buy a ticket here and (ii) tell your pals about it over here.

What a pairing this is. T.Williams and MJ Cole join forces to bring you four minutes of jazzed-up, toe-tapping fun. ‘Privilege’ is out on TW’s own label, Today, Tomorrow Records on 12th April.

Although relatively new on the HD radar, Swiss duo Adriatique have been making dance music to get lost in since 2008. This remix for Butch, out on Watergate, sums up what we’ve been missing nicely.

Almost unrecognisable from the original, Adriatique’s remix tones down the punchy bassline and focuses on adding layers of flickering drums and warm melodies. The result is complex and dreamy techno, made more for hazy after parties than peak-time dancefloors.

It’s Friday, people. Seems like a good time to get these recently-surfaced remixes of two Todd Terje classics up.

NYC producer Justin Van Der Volgen is on the buttons here, and he’s stretched out both ‘Standbar’ and ‘Inspector Norse’ into two, ten minute epics. Get ready to fall in love with them all over again just before the weekend begins.

You can buy these two edits on TT’s own label, Olsen Records, right here.