January. Thank goodness it’s over. It almost feels wrong to do a playlist for such a dreary month. But then what are we if we can’t even put together a list of January’s best music? Should we let this grey cloud of a month prevent us from nodding our heads silently at our desks? No. Consider this playlist as sticking two fingers up at 01/12. Pop in those headphones and join us as we welcome in February with an overview of the musical green shoots that sprouted in January…

Blondes are Sam Haar and Zach Steinman. They met at Ohio’s Oberlin College, where they studied electroacoustic composition and studio art respectively – before moving to Berlin and then settling in Brooklyn.

Aaanyway, life envy aside, their eponymous upcoming release is something to look forward to. ‘Wine’, HD’s favourite so far, is a mellow meander through the easier end of techno, tapping into the rich vein of low-key house that’s popular right now. Even moreannoyingly impressively, the two unreleased tracks were recorded in single takes and heavily improvised. The album is a double CD, coming with a whole host of remixes, including one by Traxx that we’re particularly excited about.

It’s out on February 7th on RVNG Intl and you can check them out in the flesh at the launch party at the Shacklewell Arms on the 16th. We’ll be there, assuming we can suppress our jealousy.

Having released the pensive dancefloor filler ‘Hope’ last year, Volta Bureau have had a fantastic start to 2012 – with an awful lot of hype around their new single ‘Alley Cat’, an infectious house track that’s been injected with a perfect dose of disco.

What with one third of the outfit owning one of Washington DC’s coolest clubs in U Street Music Hall and another third owning the label Output Noise Records, they seem to have their heads in the right place for producing quality dance music.

This is sexy, stylish and full to the brim with melody. The piano riff sounds like a contender for best of the year too, and we’re only in January. It’s out on Nervous Records now.

Regular readers will know that we are fanatical devotees of Aeroplane’s monthly(ish) mixes. But the Belgian balearic talisman is not the only DJ in the commendable habit of releasing regular, consistently excellent nu-disco sets for free.

British duo Cosmonauts have been doing the same thing for some time with their Top Ten Mixes, and the January instalment is a real peach. The highlight for us is an irresistibly bouncy little number by Black Magic Disco (aka London DJ, Justin Long). Cheekily named ‘Axel Def’, the tune features exactly the combination of snappy handclaps, whimsical synths and funky basslines that make this genre so appealing.

Cosmonauts play the Scala on Saturday 25th February as part of a pant-wettingly good line-up, about which you will be hearing a lot more from us (apologies if we bore you, but you really should buy a ticket). In the meantime, enjoy their mixes and count down the days until summer.

Shlohmo (not to be confused with Shlomo – the British beatboxing artist often seen mugging around with Foreign Beggars) is a, you guessed it, young up-and-coming beatnik making waves over here and in the US. As with the rest of this rich generation of DJs, though, there’s some serious substance behind the hype.

His early remixes of Burial and Drake still sound hot fresh, setting the tone for his follow-up releases: a chillwave atmosphere with a few jagged edges to focus the mind. He has a new three-song EP, ‘Vacation’, out on 7th February on stateside imprint Friends of Friends with a limited edition 12″ to follow with remixes by Human Drizzle fave Nicolas Jaar. We’ve had the pre-released single, ‘wen uuu’ on repeat, a sprinkling of RnB vocals will always get us grooving…

You can also catch Shlohmo at the launch of a new monthly night by Earnest Endeavours at CAMP in Shoreditch, together with label-mate Salva. Worth braving the trendies for.

This uber-infectious track by French hipster Koudlam has been floating around for a couple of years now without ever being released. Finally, much to our excitement, the track is going to be available through Luv Luv Luv Records on January 24th.

Founded on a hypnotic string loop, it is a brilliant blend of different styles. The classical orchestration is fused with bouncy pop production, and the catchy verse and chorus are accompanied by thuggish, often incoherent vocals.

We can’t wait to to hear more bombastic pop music from the self-professed ‘French Symphonic Composer’.

Disclosure have been Human Drizzle favourites for a while now, as readers of the blog and our Twitter will know. The sibling pair are set for a massive 2012, and what better way to start it than with another gem in ‘Flow’, the B-side to upcoming new single, ‘Tenderly’? The latter has been around for a while now, and it’s also worth checking out – but there’s something about the assured basslines and garage urgency of ‘Flow’ that really revs our engine. Highly recommended.

Pop is Religion. Overground is Underground. Or so say one of Human Drizzle’s favourite new (2010 emergence) labels, NYC & London residents Tri Angle Records. Home to pioneers of ‘witch-house’ (if you can bear to use that term – we can) such as Balam Acab, oOoOO and Nowa Huta, Tri Angle’s brand of hip-hop influenced, late night electronica has been subtly taking over playlists for the past year or so, prepping the way for cross-over hits like The Weeknd. Founder Robin Carolan’s 2010 FACT playlist remains a good starting point for those unacquainted with the imprint. 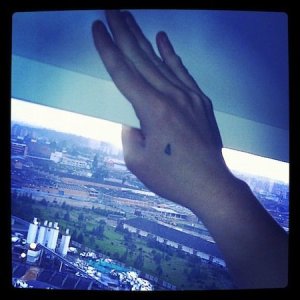 Anyway, before we get carried away, together with promotors Black Atlantic, Tri Angle are hosting their first official UK showcase on February 4th at that most familiar of London venues, the Secret Warehouse Location. Tickets are selling fast so get yours quick for the chance to see the aforementioned Balam Acab and oOoOO – alongside Holy Other, Karenn (Blawan & Pariah), Romy XX and The Haxan Cloak. Intense but rewarding.

Also, check out the label’s Twitter feed for snippets of wisdom in 140 characters, “Not all things are a mystery. Just look around you.” Well, quite.

With the dawn of a New Year, there is a(n over)abundance of new music polls and a heap of trendsetters looking into their crystal balls and hoping to signpost the next big thing.

Mixed metaphors aside, we feel Theme Park are one band who deserve the hype that they are generating in the blogosphere. Having signed up with Transgressive Records at the end of 2011, they’re currently working on a full length début with a little help from producer Luke Smith, who has worked with Foals and others. They are also managed by Coalition Management (think Bloc Party, The Streets, Delphic), suggesting we may be hearing an awful lot more from them in 2012.

In the pipeline already they’ve got some impressively diverse tour dates lined up. In February they’re sharing a bill with indie scenesters Friends at the Fleche d’Or in Paris, and with Mylo, Lindstrom, Aeroplane and Brodinski at the Scala in London. You’ll be hearing more from us on that one. Finally, they will be shaking in their boots at the prospect of warming up the crowd for Florence and The Machine at the majestic Alexandra Palace in March.

All four tracks on their Soundcloud account are instant classics. Yes, they have a super-sized crush on The Talking Heads and their sound is not the most original thing you will have heard this year. But who cares, when the tunes are this good? Their songs are sun-kissed, indie-disco tracks that will transport you to a better place.

What’s more, if you’re free in London tonight, pop down to Madame Jo Jo’s and see them headline what will be fantastic a show with Nzca/Lines and Cloud Boat, all for just a fiver at White Heat.

Catch them while you can: it doesn’t look like they’ll be playing venues like this for long.

If your New Year’s Resolution was to do more for charity, or even if it wasn’t, here’s an easy way to help out a worthy cause and acquire some great new music.

Kazu Makino of Blonde Redhead has compiled a 14-song compilation album, all proceeds of which will go toward the Japan Society Earthquake Relief Fund and Architecture for Humanity. It’s being released digitally on January 10th on the band’s new label, Asa Wa Kuru (‘Morning Will Come’ in Japanese).

Other tracks to watch out for are those by Pantha du Prince, Deerhunter, Karin Andersson of the Knife/Fever Ray, and Interpol. We’d have written about Karin Andersson’s composition but it’s offbeat to the point of hypnotic and may send readers to sleep al desko. And we wouldn’t want to be responsible for that.